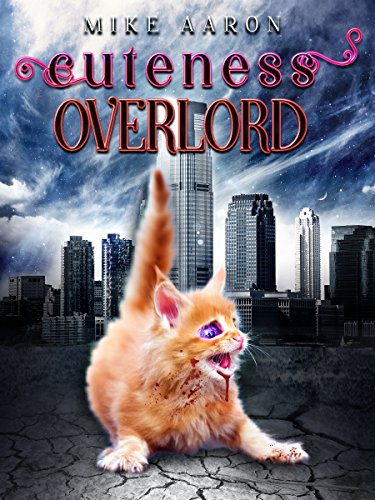 Summary: Carl Shan is destined for greatness, if only people would listen to him and recognize his genius. One day, he decided that’s it, he’s going to travel 100 years into the future where his genius can be praised. Unfortunately, things don’t work out quite as he imagined, especially when he finds himself being chased by bloodthirsty, adorable baby animals and gets his lights punched out by the alluring Vanessa.

Self-published by Mike Aaron from the Association of Merry Makers, I was hooked by the baby animals and the humor that was present from page 1. It had me smiling and giggling and, by page 2, I was laughing.

In all seriousness, this book has it’s ups and downs, though I’d say much of it did have my attention and, when I was up in the middle of the night with a nasty cough, I decided to finish reading it instead of scroll through my . Carl wasn’t always likable. Sometimes I wanted to be like Vanessa and punch his lights out. But he had his uses, and the way he discovered his amazing power was quite intriguing and had my attention!

What I appreciated most was the different groups Carl and his group came across as they sought to destroy the cuteness overlord. Since this world is 100 years in the future when cute, bloodthirsty baby animals terrorize the remaining humans under the rule of a mysterious Duke, there are pockets of humankind scattered across the world. Each group was well-articulated and unique from each other. Aaron did a great job of incorporating old world traits from cultures long gone and twisting them a bit to fit the context of the future. And the accompanying light political commentary was interesting and me thinking.

The journey Carl and his friends took wasn’t just a physical journey across the new landscape of the future UK, but a journey of the self. Carl realized a few things about himself, though he still wasn’t always likable and thought too highly of himself, but managed to make himself useful. Other characters discovered a better place in the world for themselves. Some discovered they were little more than pawns, but we’re able to overcome the hand that sought to control them.

I found this book to be highly entertaining. Humor was peppered throughout with many spots that made me stop and think and ruminate on humankind and how it might evolve. Though I have to hope there never really is a cuteness overlord because, well, I like baby animals and would be sad if I ever have to run from them.

While the story was interesting and I did have a lot of fun reading it, the writing isn’t exactly polished and could have used an editor. It was a far cry from professional and lacked complexity. I debate whether it matched with Carl or not. On one hand, it’s lack of polish does not pair well with a genius for a protagonist. On the other hand, I can see it fitting as Carl thinks too highly of himself (which can get annoying at times) and the juxtaposition of the lack of polished writing makes it interesting and humorous, even. Overall, though, I would have liked to see a bit more polish anyways as the writing sometimes fell short with misspellings, poor word choices, and an overall too casual air to it. Though it did make for an easy, light read.

How much tea will you need to read this book?

3 cups of tea should do.