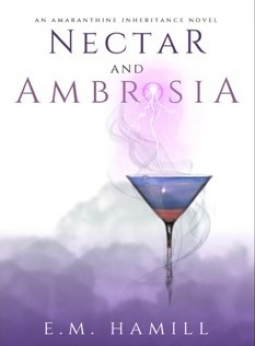 Summary: Callie is on the run, fleeing a terrifying creature and following visions that end up guiding her to an exclusive bar and hotel called Nectar and Ambrosia. Managed by Florian, a man with a mysterious past who gets her heart thumping, it caters to former gods and other mythical beings. Since Callie was able to see the sign seeking help and find the door, Florian hires her on the spot to be the new waitress. She thinks she’s taking a simple job, not too unlike the bars she’d worked in before, but quickly learns the old gods are real, and enjoy alcohol to excess. But her visions don’t leave her. Instead, the show battle and fire and mysterious figures. Turns out Callie is the first Oracle in generations and averting war between the old gods and the new falls in her shoulders. All while navigating her growing feelings for Florian, whose past has the potential to break them apart.

As a fan of Greek mythology, I leapt into Nectar and Ambrosia as soon as I got it. And then prayed my kids would nap for awhile because I seriously did not want to put it down.

This book is a delicious balance of being character and plot driven. Neither suffers while the characters develop and the plot relentlessly presses forward. They feed off of each other, resulting in a book where everyone and everything felt incredibly natural.

Let’s talk characters first. I loved Callie, but, for someone who studied the Classics, I was a little disappointed in her lapse of knowledge about the Oracle. Something new was always popping up, something she should have known, and it always caught her off guard. But her character matured naturally and I never got the feeling it was forced for the sake of the story. As for Florian, he was more static and unchanging, but it was a nice counterpoint to Callie and how her life was completely turned on its head. Besides, much of his maturation was done before the story starts.

As a matter of fact, all of the characters were delightful. Hamill took the raw material of each god and mythical creature and gave them a fitting life of their own. Normally, when I read anything using Greek mythology, I have something to complain about. But not this time. Hamill was brilliant with each and every creature, keeping them true to mythology, but also expanding on them. The final twist to them was not entirely mind-blowing, but incredibly satisfying and completely believable.

The story was artfully crafted. Even though there will likely be more books, as the ending hinted, this is a fully contained story on its own. We get mystery, intrigue, romance, war, and an ending, though not the ending. The conflict builds, reaches its peak, and is resolved in a most natural and satisfactory way. It makes sense, every step of it. If I have one criticism, it would be that it happened rather quickly. Plot points were reached naturally, but it seemed to be one thing after another and the reader, and Callie, are never really given a moment to sit and think.

Clearly, Florian was meant to be Callie’s love interest, but their interest in each other made sense. However, this made for some heavily romantic, but innocent, moments that I, personally, could have done with less of. I appreciated that Hamill clearly showed their attraction to each other without throwing them together at the first opportunity, though. Instead, Callie and Florian cautiously explored their budding romance, always keeping true to who they are.

And, clearly, I really enjoyed this book. While the focus is heavily on Greek mythology, all pantheons and kinds of mythical creatures were up for grabs and Hamill deftly used them to tell an amazing story about clashing gods and the one person with the power to save the world.

A definite 5 cups, or more if you never need to use the bathroom

Note: Thank you to NetGalley for a free copy of this book in exchange for an honest review.

One thought on “Book Review: Nectar and Ambrosia by E. M. Hamill”