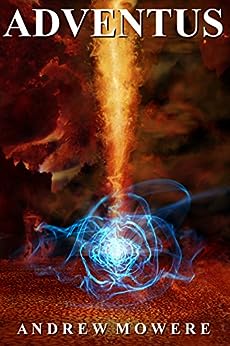 Summary: Three portals have opened across the world of Grimea, three portals from which refugees from three different worlds emerge: elves, orcs, and dwarfs. Ambassadors and leaders from these foreign worlds meet with those of Grimea and they decide to send one representative from each land/world to journey together for a year on a mission to slay an ifrit terrorizing one part of the world. If they are successful, negotiations for how to deal with these refugees can begin. If they fail, war is a strong possibility. But this band of strangers and misfits harbor many secrets and manipulation is most definitely in the cards.

As a loyal follower of The Association of Merry Makers’ blog, where Andrew Mowere writes with two others, I have been eagerly awaiting this novel for much of the past year, which was released on September 1, 2018. Billed as a dark fantasy that deals with government manipulation and what to do with refugees, Adventus does not disappoint.

This novel is indeed quite dark and twisted. Honestly, I just want to know what was going on inside Mowere’s head. I was caught off-guard more than once by just how dark and twisted most of the characters were. There are unsavory characters, characters with deeply tragic and twisted histories, and characters who can and will manipulate the others in the name of their country.

But Adventus is also, incredibly, an amazing story about friendship. This group is comprised of magician observer Yuuto, Priest of Fep Lily, a young and naive new Mkuki warrior named Odum, the wizard Wester, psion Ilya, the elf Ur Istahla, the orc Biyum, and the portal magician dwarf Kehno. A diverse group who come from worlds and countries that would manipulate and step on each other for one reason or another, they should be wary of each other. They shouldn’t trust each other. They should be, and do, manipulate each other. And, while they do, they also don’t. For a year they get to know each other, learn to rely on each other and work together. Sent to fail, they do anything but. A group of misfits, they find companionship and understanding with each other. Though this book is deeply dark and often disturbed, it is also a beautiful story of friendship.

My one complaint is that this was a rather bare bones kind of story. The story itself kept going, pushed forward both by the plot and the characters. But it only really hit on the major scenes, was light on the details, and light on world building.

I loved that the story never got bogged down. It marched forward as the characters pushed on to fulfill their mission. The characters changed, but also stayed true to themselves. Their histories and a bit of their cultures are brought in to help bring life to the group and the story. Plot points were hit, but the pieces in between were lacking. I appreciated that the story kept going, but it could have been fleshed out more. I would have liked more scenes where they are simply traveling and getting to know each other. There is one small subplot with Ilya that didn’t hit me as a subplot until much later on because it wasn’t mentioned often. A few more scenes devoted to the strange occurrences involving him would have been appreciated and would have much more illuminated his character, as well as add flesh to the story.

I did enjoy that the story didn’t get stuck on the details and never spent too much time on any one thing. It was mentioned, occasionally referenced, but never given too much focus. On the other hand, it means I can’t truly picture any of the towns or cities. Just enough details were given to paint a general picture, but I lack vivid images in my mind. There is a definite focus on the telling of the story, but not a great deal of details to describe anything. This is a very bare bones story, meaning it gives us the essentials and not much more. While I appreciated the focus on simply telling the story, I also enjoy my fantasy having more to it.

The dearth of details fed into the lack of world building. While I appreciated simply being thrown into Grimea, I have no prior knowledge of this world that is very unlike Earth. I spent a lot of brain power trying to figure out the countries, the cultures, the races, and still have no clear idea of the group’s path. I’m still a little fuzzy on the countries and think I’ve mixed up some countries and towns. There is also a religion of sorts, but it’s only really mentioned when relevant, and not to any real extent outside of what the reader really needs to know at that point. I love when an author simply throws the reader into a world, but, unfortunately, not enough world building follows for me to feel like Grimea could be a real place. There are definitely some places they go to that I’d like to be more detailed so I can see it better in my mind, like Indellekt (not really sure if this is a country or city).

As a follower of the blog, where Mowere has posted about his writing progress, excerpts, and general musings, I knew beforehand that there was a chapter he was deeply questioning. Honestly, I’m glad he left it in, and really didn’t realize I’d read that chapter until about a whole chapter later. Yes, it was deeply disturbed. Yes, it is sickening. But it ties into the story beautifully. It fits. It’s the puzzle piece I had been looking and waiting for. I think this story needed it and, had it not been in the book, I would have been a little frustrated.

Adventus is a deeply disturbed novel. It’s dark. It’s twisted. It makes me wonder. At the same time, it’s probably one of the most beautiful books about friendship that I’ve ever read. A group of strangers and misfits who are forced together and carry different instructions from their leaders, but somehow manage to become like best friends who will literally do anything for each other. I don’t know how Mowere managed to write both a dark, twisted story and a tale of strong friendship, but he did.

One thing that I absolutely loved was that Mowere didn’t hit the reader on the head with every little revelation. He didn’t give everything to the reader. Instead, he lets the reader reach their own conclusions on their own, gives enough information for the reader to piece things together. There were times when I wished he would give a little more, tell a little more of the story, but he probably would have given too much and the reader wouldn’t have the chance to piece it together on their own. I don’t like being hit on the head with everything, so really appreciated his writing style.

Though not perfect, and a little too light on details and world building for me, I still appreciated the story and thoroughly enjoyed it. It definitely got my heart pounding. And I got a little angry about 89% in because I knew it was going to end soon and I didn’t want it to. I wanted more time in Grimea, more time with the characters. With how quickly the story went I felt a little robbed, but, by the end, I was satisfied with the ending and thought it ended on a beautiful, if sad, note.

A definite and very full 4 cups of tea. And no snack because it might threaten to come back up.