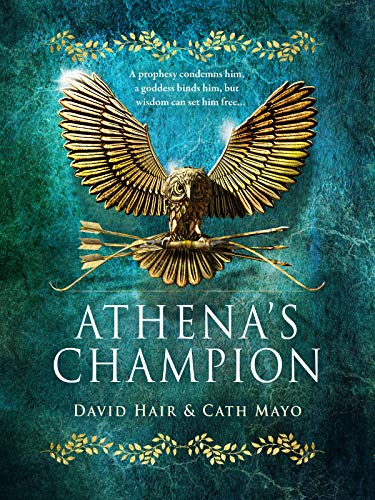 Summary: Prince Odysseus of Ithaca travels with his family to Pythos to be anointed as his father’s successor. It was supposed to be simple and straightforward. However, the words that leave the Pythia’s mouth turn his world upside down, estrange his parents, and result in his expulsion from the family and his home. Now on the run to stay alive (as his line is destined for death), he ends up being blessed by Athena, becoming her newest champion and putting him in the middle of a brewing war between the gods and mankind. He becomes instrumental in one of Athena’s schemes that goes horribly wrong and only his wits and history as a youth in Sparta spare him. But it also takes him into Hades and puts him head to head with the legendary Theseus.

As a huge fan of Greek mythology, I couldn’t wait to read this one. While I love the traditional stories, I also enjoy modern takes. This book was certainly a twist on the  myths, but I can’t say I enjoyed it as much as I have other twists.

Athena’s Champion is basically a story about Odysseus’s youth. We see him as a young man, newly come of age and heir apparent. He has streaks of naivete and signs of the great tactician he becomes during the Trojan War. He is most definitely a thoughtful character in this book, and I was often put off by how much thinking he did during the first half. I almost felt like all he did was think, think, train, and then think some more. I get it; he is wise and analytical, but I feel like he thought a little too much.

If you’re looking for a story that aligns with the myths, this book doesn’t always do it. I appreciated the fact that it does follow some of the stories, puts them in a chronological order, and tells the story of a youthful Odysseus, but it was definitely not fully in line with the myths, taking certain liberties that had me frowning. Now, I love a good twist, but this felt like it went a little too far, especially since it’s supposed to be historical fiction. Yes, I know creative license is common and taken, but I’m too big of a fan of the originals to really appreciate it. Though I did absolutely love that the authors mentioned Heracles instead of the Roman equivalent Hercules that so many other writers use.

Since this book did put several events into a plausible order, I could forgive quite a bit. However, what was truly jarring to me was this weird modern impression I got. Some of Odysseus’s thoughts felt a little to modern and I’m not sure the Ancient Greeks would agree that that’s how they thought about people and the world back then. Again, historical fiction, so I do anticipate artistic license, but also expect some historical accuracy. Overall, this felt like it was a more modern Odysseus who was sent back in time, so he lived during the Ancient Greek times, but had modern day thoughts about the gods.

What I did absolutely love are that it was easy to follow, gave a great possible backstory for Odysseus and how he might have come to be the great leader he was during the Trojan War, and provided a most interesting theory for the gods. It certainly made me think and reevaluate the stories that I know, encouraging me to look at them in a different light. As a matter of fact, I feel like I should re-read The Illiad and The Odyssey right now.

What I absolutely did not love was the romance subplot. It was strong at the beginning, barely present in the middle, and weak at the end. By the time I reached the end of the book, it felt like it was there to serve as a plot device to get some action rolling and then the authors had to do something with it, so tried to reinforce it in a convincing way at the end. It just left me puzzled and disgruntled. Especially since the romantic interest was not Penelope, his eventual wife in the myths. Instead it’s Kyshanda (Cassandra, the doom prophetess, though this fact is never mentioned so maybe she has yet to become the doom prophetess?). It makes me wonder when and how the authors will bring in Penelope, or if they will, in subsequent books.

As I said, I’m a huge fan of Greek mythology and will take on just about any book I come across that uses it. I wanted to love this book, but I don’t think I do. I definitely enjoyed it, but it leaves me feeling dissatisfied and disgruntled. However, it is a stunning book full of possibilities and absolutely got me thinking. Whether or not I’ll pick up the subsequent books in this series, I’m not so sure, though I am curious to see how Odysseus’s new story will turn out.

I waver between 3 and 4, but I think I’ll go with 4 because it really is a beautiful book even though the handling of the myths was not to my complete satisfaction.

Thank you so much to NetGalley and the publisher, Canelo, for providing me with an advance copy in exchange for my honest review. It is set to be released on November 8, 2018.

One thought on “Book Review: Athena’s Champion by David Hair and Cath Mayo”