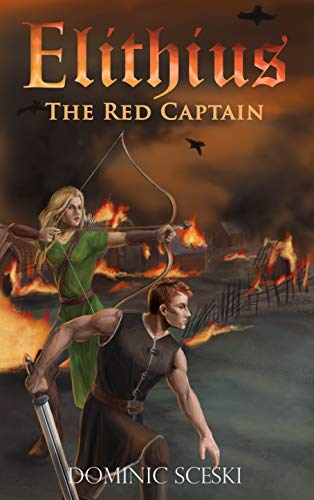 This is a review of the newest edition recently released on December 7, 2018. Thank you so much to the author for providing a free copy in exchange for an honest review.

Summary: After the abrupt disappearance of his parents a few years before, Fear is left in charge of his ungrateful younger brother and sister. Typical of a teenager, he doesn’t want the responsibility, but, when his siblings are kidnapped by creatures called the Volcryie, he sets out to rescue them. His search takes him and two companions across the Golden Lands, where there is no darkness and night, all the way to the portal of the Dark Lands.

In the author’s note that precedes the novel, Sceski clearly states this novel was heavily inspired by anime and follows the tradition of anime. Initially, I was a little apprehensive as I am not a fan of anime and have only watched a few, many years ago. I know the style is distinctive, but worried I wouldn’t understand this book or would find scenarios absolutely ridiculous because of my lack of understanding of anime. However, I was pleasantly surprised that it was easy to follow, definitely different from any other fantasy book I’ve ever read, and my memories of the anime I have seen (primarily Sailor Moon and Pokemon back in the ’90s and occasionally Dragon Ball Super with my husband who very patiently explains that one to me every time) helped me recognize what were likely anime elements and helped me enjoy the story. I could definitely envision this as an anime, complete with everything I liked and hated about the genre, which is why I don’t watch it.

This is a typical quest story with the main characters on a journey to save Fear’s siblings, along with a subplot of someone after Fear. Initially, the subplot didn’t make a lot of sense to me, but absolutely did by the end. The story moves along at a good, quick pace and is extremely action packed. There always seemed to be something happening, whether a battle or the characters coming to a realization about something important. I loved that it never stalled, but, by the second half, was kind of done with all the fighting scenes, especially as they seemed to lengthen the longer the story went on. I think one of the fights lasted 2-3 chapters. But I appreciated that the story and characters developed together and moved the story along in a way that made sense. My one problem with the story was the end. It was a little too convenient with the way their arrival in a city happened to prompt a complete change in attitude towards the invading Volcryie. It made the final scenes completely possible and enabled the characters to find a way to rescue Fear’s siblings without some utterly crazy plans and designs, but it was just too convenient. The end definitely felt plot driven, but the rest of the story was a nice balance between being plot and character driven.

Speaking of characters, there were just a handful of main characters and all of them were unique and generally consistent. Their behaviors and how they reacted to the story fit well and made sense. However, somewhere in the middle, Fear seemed to undergo an overnight transformation in the way he thought about and approached life. He went from angry teenager to a more thoughtful and decent human being very quickly, so the transformation was a bit jarring, especially when one considers Fear is just a teen and teens are often sullen and angry and this is a repeating pattern no matter how good they are. Which is also why I don’t enjoy most YA, but, even though it was a very quick change in personality, Fear did have an awakening of sorts and the change was consistent, so I can forgive this and maybe even believe the abrupt change. Perhaps this is common in anime?

As a fantasy book, I can’t not talk about the setting. The Golden Lands were definitely interesting and different. A world that never experiences true night and operates with no laws. My first thought is: how is that even possible? Actually, I’m still a little confused as world building was a little lacking, but at least it was consistent in how the world was presented. I just wish it had been developed a little more because I found it so interesting. One thing that really puzzled me was that there are no laws, but bandits are frowned on. Well, if there are no laws, then how can there be bandits? What they do isn’t illegal in this case. Honor clearly seems to be important, but how the lack of laws actually works is confusing to me. Also, everyone seems to know how to use a sword, but no one ever mentions how they’re taught and how they become so skilled (by growing up fighting each other, maybe?). I wonder if maybe they just have the instinct as the concept of a gado becoming affixed to a sword is known by just a few (the trained few?). I don’t understand how some know about it and others don’t.

Overall, the Golden Lands seem to be a very traditional sort of world. Men are referred to as Knights and women are called Beloved and are supposed to be protected. Though we clearly see one of the leading ladies fighting, the general reinforced idea is that the Knights are supposed to be revering them and protecting them. Homosexuality is also touched on in the context of this traditional world. As a liberal, it was a little hard to read, but it fits with the world. Though you have been warned. On a related note, I offer a trigger warning regarding rape and how it’s dealt with.

Regarding the writing, it generally lacked polish, but it was consistent throughout the entire book. It was a little redundant and there was an awful lot of grunting. Everyone was grunting, to the point where I started wondering if they were capable of making any other sound. The characters’ speech was also a little off, but, as with everything else, incredibly consistent. Old fashioned ways of speaking mixed with more modern speech patterns in a bit of a jarring way, but it was so consistent and every character was doing it that maybe it’s just part of the world building. At first, though, it was just strange, but, as time went on, it was just part of the story. One thing that did annoy me throughout, though, was the character switching. I’m used to books that use chapters as a means of switching the POV. This book had a Protagonist Switch: [Name] approach at the start of and within the chapters. Without the headings, it would have been difficult or impossible to know whose POV it was. It also made it a little confusing sometimes to pick the story back up when I had to stop in the middle of a scene. I wonder if this is just part of anime. If it is, then it’s just me. I don’t have to like it, but I do respect that anime comes with its own unique style and who am I to complain?

This is the first book in the Elithius series, so there are a lot of dangling threads. I debate whether I would read further. On one hand, it’s an interesting story and different from anything I’ve ever read. On the other, anime simply is not my cup of tea. It’s an action packed story that keeps moving, which is nice, and has very little romance, which is even nicer. Not every story has to have it and I like that this one embraced the lack of romance being necessary. I think this is a great book to pick up if you enjoy anime, even if you don’t enjoy fantasy. I also think this is a good book to pick up if you enjoy fantasy and are looking for something different.

4 cups of tea, because that action really keeps going and it’s hard to stop in the middle of a sequence!