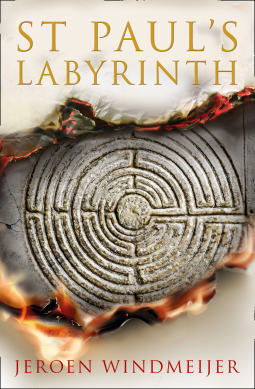 Summary: It starts innocently enough with a staged dig to launch an underground project in Leiden, Netherlands. But the discovery of a naked man covered in blood in a tunnel beneath the city is anything but. Then university professor Peter de Haan, who witnessed the cave-in and discovery of the man, discovers a cell phone in his pocket, mysterious messages on it that vanish as quickly and mysteriously as they come, and his good friend Judith missing. By some unknown hand, he is sent on a 24 hour mission through the city, discovering an underground society that struggles between wanting to be known and kept hidden. But all he cares about is finding and saving Judith.

I love a good thriller and am intrigued by secret societies. This is definitely a thriller, complete with assassination attempts and a man running to save his friend despite having no idea who is driving him forwards and having little idea what he is doing and where he is going. But it also felt a little bizarrely like a tour guide of Leiden. We followed Peter as he traveled down this street and turned a corner onto that one and returned to this street via that way, but I still have zero idea where in Leiden anything was. I appreciated the moments Peter took to reflect on a museum or monument and the familiarity with the city, but I was most definitely “lost” all the time and sometimes wondered if this was a guide book. If I could remove the city from the story, it was much less confusing, so, by the end, I had no clue where Peter was, but sure enjoyed the story.

I don’t think this book is for someone who has little familiarity or knowledge of Judeo-Christianity as it plays heavily in this book, to the point of majorly involving a secret Christian society called Mithraism. Bible verses were quoted everywhere and the stories of Christ and the disciples who spread his story were prevalent, but not always explained. Even though I was raised Lutheran and have a solid foundation despite not practicing anymore, I still had a hard time following the religious elements. I had never heard of Mithraism, so it was kind of like being reminded of what I was raised with and then someone coming in to say, “Well, actually, it should really go this way…” But the Mithraism was a little easier to follow as the story progressed along with the author’s telling of it. What was most confusing, though, was the repetition and continual re-interpretation of each Bible verse.

What really confused me for most of the book was where the prologue fit it. I hate prologues that barely tie into the story, so kept wondering how on Earth it fit. On one hand, it’s heavily religious, but it takes place in Spain whereas the main story is set in the Netherlands. Finally, I found it, but it was basically retold, much more succinctly, so I question whether or not the prologue was necessary.

The pacing was very quick (after all, Peter only has 24 hours) and definitely merits a slow read through. It’s simply too complex for a quick read. Honestly, I should have taken more time to read this and it would probably have boosted my understanding, but the quick pace made me want to keep going. I obviously made the wrong choice, but one day I’ll probably return to this book and take it a step or ten slower.

3 cups should do the trick, along with Google

Thank you so much to NetGalley for a free copy in exchange for an honest review.