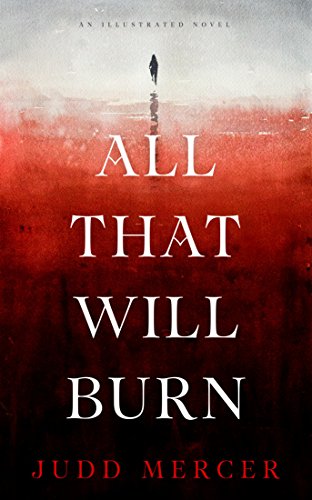 Title: All That Will Burn

Summary: Sofia washes ashore on a desolate beach with no memories other than her name. She soon stumbles upon a group of people just like her, but she’s the only one who knows her name. In the wake of their growing distrust of her because of this, she leaves the group to wander the unknown world. Before long, she comes across an angelic figure, falls back in with the group she had initially stumbled across, and discovers she is in the afterlife. But because she is one of the named few, there are many who call for her exile from the city. However, those who see the potential in her allow her to train for the chance to become a Sanguinir, an angelic being, only to be drawn into the middle of the battle between the angelic beings and the darker, more demonic immuertes who seek to destroy the light.

Initially, I was drawn to this book because it was listed as being an illustrated novel. I’ve never come across an illustrated novel before, so I was curious about what it would look like and how illustrated it would be. While the illustrations were beautiful and a nice touch to the book, I don’t feel they actually added anything to the story. There also weren’t that many; at least, not as many as I would have expected in a book billed as an illustrated novel. Honestly, I could have done without them and it wouldn’t have impacted my enjoyment or understanding of the novel.

This is a basic good vs. evil type of story that just happens to take place in the afterlife. Honestly, I think the idea was interesting, but the execution was a little lacking. It was absolutely an interesting take on what might happen after death, but any fantasy world could stand in for the afterlife in this book. Simply put, it was a unique idea, but I didn’t feel it was any different from any other world in any other fantasy book. Besides, outside of the angels and demons and mentions of limited immortality, I often forgot it took place in the afterlife. The world building was actually quite adequate, but I still only came away with hazy images. In a sense, the world is rich, detailed, and interesting, but descriptions felt a little lacking.

This is dark fantasy. It explores characters with a darker nature and the deformation of souls to form the monstrous immuertes. The beginning chapters were so graphic and horrific that I thought it was actually a horror book. However, as I read on, and definitely nowhere near nighttime as I scare very easily, the horror elements almost completely vanished and it turned into little more than a standard fantasy novel. By the end, even though the horror elements had returned, it was not quite as horrific as the beginning and I struggled to see this as dark fantasy.

During the last quarter, the story really came together and made sense. There were hints of Sofia’s life before death and her family throughout the story, but it never made a lot of sense until the end. I did find the family connections a little too convenient, and a little absurd that so much of the story hung on them when this was supposed to be a battle greater than Sofia. But it did tie the story together and the end was actually rather satisfying. The prologue (that I had completely forgotten about during most of the book) finally made sense. I hate when the prologues have little to do with the meat of the story, so was glad to be able to ruminate and realize it was a nice piece.

To be honest, this book took me weeks to finish. I was intrigued by the illustrated dark fantasy nature of this book, but it really turned into a slow read for me. It’s not that it was bad; it just wasn’t my cup of tea. I contemplated abandoning it several times, but am glad I finished it as I really enjoyed how it ended. Unfortunately, though it may have been explained somewhere, I still don’t understand why Sofia could not be burned.

3 cups should do the trick.

Get your copy (The Lily Cafe is NOT an Amazon affiliate, so I make zero if you purchase through this link.)

Thank you so much to NetGalley for a free copy in exchange for an honest review.

2 thoughts on “Book Review: All That Will Burn by Judd Mercer”