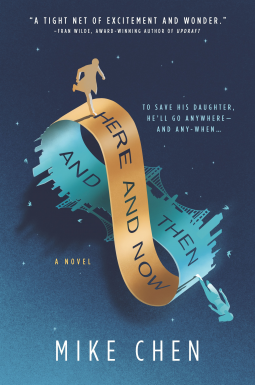 Title: Here and Now and Then

Summary: Kin Stewart is a time traveling secret agent from 2142, except he becomes severely injured during a mission and gets stuck in the 1990s. Without proper medical intervention and no sign of help coming from the future, Kin slowly begins to forget his life in 2142 and starts a family. Eighteen years later, where only two weeks have passed in the future, Kin’s retriever agent comes for him, forcing him to return home and inevitably tearing him between his two families. When his attempts to keep both families are discovered, and his daughter from the past inadvertently threatens the future, he’ll risk anything and everything to save her and fix the future.

An intriguing light sci-fi with elements of romance, it was complex and sweet all at the same time. Honestly, though, the details of time travel and the inevitable paradoxes were a little over my head. I didn’t always understand how time functioned with years in the past passing by whereas only a few hours would go by in the future. The time travel element was confusing, but I don’t feel I needed to understand every detail of how it worked to enjoy the story. But the future didn’t feel too jarringly different and I could see it as a definite possible future. Overall, it was just a really sweet story about a family man who wants to do right by the people he loves and to make amends for mistakes he hadn’t even realized he had made.

The first half seemed to move at breakneck speed. Multiple events occurred where any number of them could have been a mid point or turning point, but only served to lead up to the mid point. There was so much happening, it kind of felt like the story was moving along a little too quickly, especially since it occurred over a relatively short amount of time. At the same time, Kin seemed a little frozen. His character felt static as he tried to keep his two lives separate. In the second half, the story seemed to slow down quite a bit as it was all downhill and involved a single overarching event. But this is also where we see Kin prove what he’s made of. While he spent the first half of the book projecting a certain air to everyone around him, he let all that down in the second half to prove he’s a loving man who will do anything to make things right.

I wouldn’t call this a romance, but there is a very strong romance element. Here we have a man who has a wife and daughter in the past and a fiancee in the future and we see him have relationships with both romantic partners. The one thing I found annoying was how opposite the two women are, almost as though Kin sought the exact opposite of what he had in the future when he was stuck in the past. It makes me question him and I wish the women had been a little more alike, but it was interesting to see how he interacted with such different women. In the end, it was a really sweet romance without any real drama.

Despite how quickly half of this book moved, it did feel like it dragged a bit. Either too much was going on or too little. There were times when I wanted to stop or just take a long break from it, but I was also reading it aloud to my kids at naptime and bedtime and didn’t have anything better to read, so I kept going. And I’m glad I did. The ending was totally worth it. The whole story came together beautifully and I have zero complaints.

Overall, I wouldn’t really call this sci-fi or romance though there are strong elements of both. Instead, I like to think of this as a nice story of a man struggling with mistakes he made and trying to atone for them. This is his story and he really is one of the good guys.

4 cups should do the trick

Thank you so much to NetGalley for an advance copy of this book in exchange for an honest review. It is set to be published January 29, 2019.

4 thoughts on “Book Review: Here and Now and Then by Mike Chen”