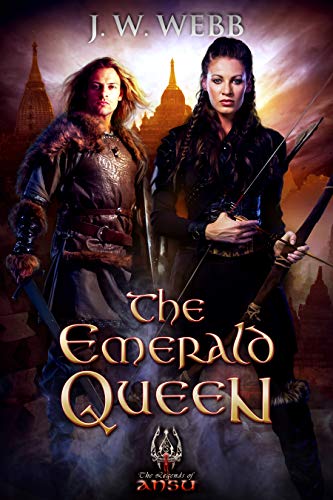 Summary: Seven years after the gods have been destroyed, Queen Ariane has a Dream that has her sending Captain Garland after her cousin Lord Tamersane. Following the war, Tamersane and his wife Teret had vanished into a city in a distant land, but he is now the key to staving off a power hungry emperor, the only one who can use the mythical bow Kerasheva. Simple enough, but three ancient sister sorceresses have their own games to play with Garland, Tamersane, and Teret. Fortunately, it brings them all together in a race for the bow, but the question should be why these rival sisters want it.

Book descriptions are often a reader’s first introduction to a book. They give a taste of what you can expect and what the story is about. As a reader, I expect accuracy. With this book, I feel like I was duped, and that leads to a general feeling of resentment towards this book, so take my review with a grain of two or salt.

Now she must conquer her own demons before she can face this new enemy head-on.

I can count on one hand how many times we actually see Queen Ariane, which is a shame because she seemed like the most fascinating character. I’d love to know more about her demons and actually meet the emperor as he’s only ever talked about.

Description aside, this book followed three main threads: war veteran Garland who will do as his queen bids, fallen and haunted man Tamersane who turned to drugs, and his ever-loyal wife Teret. Throughout the story, they are manipulated by the annoyingly cheerful and completely unhelpful Piper/Jynn and three sister sorceresses who are at odds with each other and do everything they can to play each character against the others as a means to an end.

Overall, I feel largely indifferent about this story. On one hand, it keeps moving and each move is logical. On the other, it wasn’t entirely compelling to me. It’s basically a really long journey into foreign lands and has the main characters on a quest while being manipulated by magical beings. Standard fantasy fare that adds little to the genre.

What I did find intriguing, and confusing at the same time, was the world. The wheel metaphor describing different times and dimensions was confusing until the end and, honestly, it felt like a stretch for much of the book, but it did create an interesting world of time and place converging. Of note, Rundali was quite fascinating with its movable forest (that I would never want to be caught in, but loved reading about). However, the world did feel a little out of focus. It was much easier to read about if I didn’t focus on trying to figure it out, especially those woods since each experience was similarly terrifying but altogether different. Described as a stand alone, it definitely can, but I wonder if I would have benefited if I had read the previous books. Maybe the world would be crisper.

I can’t not mention the writing. It kind of felt like I was reading a dialect of English. Considering the author is from England and currently lives in Georgia, that may very well be true! But it was annoying reading this book with a great deal of words like a, an, and the missing. Sure, I get what “go to table” means, but “go to the table” would have made for a smoother reading experience. There was also quite a bit of cursing and some very sex-hungry females that was a little off-putting to me, but nothing I couldn’t gloss over. Overall, the writing felt a bit coarse and rough. Unfortunately, it was annoying and impacted my reading enjoyment.

The bottom line: a typical fantasy storyline where you don’t have to read the previous books to understand it, but it might help.

Two should do the trick

Get your copy (note: The Lily Cafe is NOT an Amazon Affiliate. Should you choose to purchase a copy through this link, I will not receive any compensation.)

Thank you so much to NetGalley and the author for a free copy. All thoughts expressed here are entirely my own.

One thought on “Book Review: The Emerald Queen by J.W. Webb”