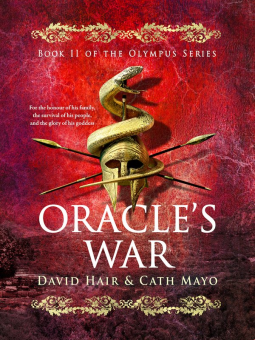 Summary: In the second book of the Olympus Series, Odysseus, one of Athena’s champions, finds himself caught between conflicting prophecies. What was supposed to be the happy wedding day of his sister to her beloved turns into a nightmare brought about by the hands of a meddling, powerful seer and sorcerer, Tiresias, who wants Odysseus to go after him for his own purposes. Ordered to go after the seer by his father and his patron goddess, Odysseus quickly finds himself on his way with the daemon Bria, Athena’s newest champion Diomedes, his faithful servant and friend Eurybates, and several Ithacan soldiers to the island Delos, where a novice had a spontaneous prophecy that suggests impregnable Thebes is not so impregnable, and the sons of the seven men who marched on Thebes only to be slaughtered stand a chance of recovering their family’s honor. Odysseus finds himself with no choice but to convince them to go to war, all while Tiresias will do everything in his power to destroy Odysseus and ensure the rogue prophecy fails to come to pass.

Oracle’s War is a nice follow up to Athena’s Champion. Like the first book, it strings together several stories of mythology and ancient Greece to present a coherent and well-reasoned out story. Indeed, it fleshes out the stories and makes them more interesting, and easier to follow as sometimes the stories become convoluted with too many names and places. I don’t know what ancient Greece might have been like, but Hair and Mayo present many possibilities that could have actually happened, especially when it comes to war.

Actually, that’s the one thing that I wasn’t fond of. Of course, I see the war as being a necessary and large part of the story, but the graphic detail of the battles and pointless pillaging was unsettling. I might wish there had been less of it or that it was glossed over, but it would have taken away from the feel of the book, the story the authors were telling, and made the historical fantasy part that much less authentic. Still, it is unsettling and comprises a good chunk of the book.

There were 3 things I wasn’t fond of in the first book: 1) I felt too many liberties had been taken with the stories, 2) the weird modern impression I got from it, and 3) the romance between Odysseus and Kyshanda. This time around, I don’t have the same complaints. Whether this is because it wasn’t as evident or because I knew what to expect and my mind could be more forgiving, I’m not sure. But I did enjoy this book much more than the first. I also am not as familiar with the Seven Against Thebes story, so it was interesting to read about as well as how the sons were able to avenge their fathers.

The characters were interesting. The setting was well-described. The plot moved along at a good pace. Nothing superfluous happened. This book has what I like to think of as internal validity (I don’t think it’s real outside of the sciences and this may not an accurate use of the term, but it makes perfect sense in my head), meaning everything made sense, everything fit together, everything that was present in the first half came full circle in the second half, and there was nothing pointless presented just to make the story longer or more interesting. I love books with internal validity (again, I probably just made this up). Actually, I got so excited to see something presented in the first half pop up in the second half that I had to put the book down for a little bit just so I would be able to fully enjoy the scene. It was glorious. And Odysseus is a genius.

Oracle’s War is as stunning as the first book. But, where I didn’t entirely enjoy the first book, I’m glad to say I loved the second book, and I look forward to the rest of the series. It’s set to be a trilogy, but I hope there will be more books beyond that.

Definitely 5 cups. I only put it down because my kids were demanding my attention.

Get your copy (The Lily Cafe is NOT an Amazon Affiliate, so I will make absolutely nothing if you choose to purchase the book through this link.)

My review of the first book, Athena’s Champion.

Thank you so much to NetGalley and the publisher, Canelo, for a free copy of this book. All opinions are my own. Oracle’s War is due to be published on April 29, 2019.

One thought on “Book Review: Oracle’s War by David Hair and Cath Mayo”