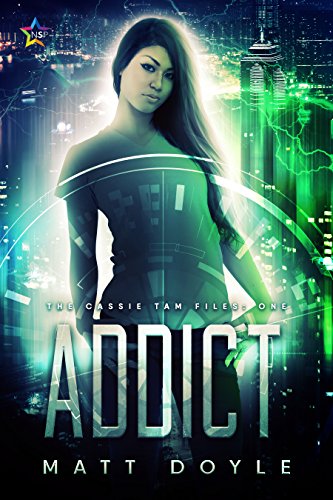 Summary: Lori Redwood’s brother was found dead, and the police ruled it an accidental overdose. After all, VJ Addicts are not just addicted to the virtual world, but the synthetic drugs they rely on. But Lori isn’t convinced her brother wasn’t murdered since he always said he never used. To prove it, she goes to P.I. Cassandra Tam, who will either give her client closure and reveal a few unsettling truths about her beloved brother or prove Eddie Redwood was murdered.

As a mystery, Addict was a lot shorter than I’m used to. It followed a rather logical flow with one thing clearly leading to the next without many red herrings. Though I was impressed by how quickly Cassie was able to work. Addict isn’t a terribly long book, so the mystery is, likewise, not too complex and over relatively quickly.

At the same time, I’m kind of glad it wasn’t overly complex and long. Doyle is imagining a future world full of really different technology. This book felt like it was an introduction not just to the Cassie Tam series, but also to this new world. There are a lot of differences between the present and the author’s imagined future and, sometimes it was a little too much for my mind as I’m far from tech savvy, so I appreciated the simple mystery. Overall, it was a really nice balance between an introduction to the world and a mystery.

I loved Cassie. She’s tough, smart, a little rough around the edges, and very human. She isn’t afraid of asking questions, both professionally and personally, but is often aware of how they might be negatively construed. Also, I was thrilled to learn Cassie is Chinese Canadian. Being Chinese myself, I sometimes struggle to relate to the characters I read, especially since so few of them in my preferred genres are anything other than white or, once in a while, vaguely Oriental-inspired. While it wasn’t a strong aspect of her character, it added a nice touch and gave me a sense of identification I often don’t experience.

I also loved Lori and how she could be so strong despite her brother’s recent death. She was often amused by Cassie, but their relationship unfolded quite beautifully, and I loved their interactions. They were real and fun while moving the story along. But what I loved was seeing Cassie being so confident and self-assured while she worked, only to have it upended when in Lori’s presence. It made Cassie feel very human and helped reveal her flaws. It was also lovely to see how normal homosexual relationships are in this world.

What I had a harder time with were how fast the mystery moved and all the new technological advances being presented. Cassie seemed to make a lot of leaps and bounds that I wouldn’t have been able to, so I’m quite impressed by how she thinks. She manages to put things together in split seconds and can follow information faster than I can process. It was sometimes overwhelming when so much information was presented, but it all seemed to make sense. There are also a lot of terms like Tech Shifting and VJ Addicts and VJ Pros, which are the major ones. They’re well-described and I eventually got the hang of them, but, at first, it was a little overwhelming. Again, though, this was a good introduction to the world and I appreciated the simple mystery so I could have more brain power to figure out all the tech-related terms and how they functioned.

This was a fast paced book with interesting characters and an intriguing world I’d like to further explore. If you like science fiction and mysteries, definitely give this a try.

4 cups of tea will be perfect.

Thank you so much to the author, Matt Doyle, for a copy of this book. All opinions are my own.