I like to think I’ve finally mastered ratio baking a chocolate cake. A high ratio chocolate cake, that is. At least, one that I enjoy because my husband won’t eat chocolate cake, my son only likes to decorate, and my daughter is partial to the whipped cream. And my cat should absolutely keep her distance. Oh, well. More cake for me.

Anyways, I thought that perhaps the pinnacle of my chocolate cake journey should be a recipe. So I set out to convert my ratios into measurements. Twice. The first time was a disaster, and even I didn’t want to eat it. The second time, thankfully, was a success. But it is a bit of a headache to do, and does produce twice as much cake that shouldn’t be healthy for anyone to eat in one week, so, after this one, I’ll be sticking to what I like to call ratio recipes, a hybrid of ratios and recipes. Oh, you’ll see what I mean in the upcoming weeks.

This is my high ratio chocolate cake with stabilized whipped cream frosting. Keep in mind I did use 8 inch pans instead of the standard 9 inch ones, so if you’re using the 9 inch, the cakes will be a bit thinner and the baking time might be a bit different. I prefer 8 inch because it’s an inch smaller, and I’m basically the only cake eater in my family, so it’s not as intimidating to stare at.

Whipped cream will not hold up for long. If you’re not eating the whole cake right away, do make sure you stabilize it.

I am a baker, not a decorator. These steps will help you put the cake together, but it likely will not look pretty. Just like my picture of the finished product. I repeat: baker, most definitely not a decorator.

I am so not a decorator. Maybe I’ll pick that up next year. Or the year after. You know, I could probably use a new hobby in 20 years when my kids are grown. And maybe out of the house. 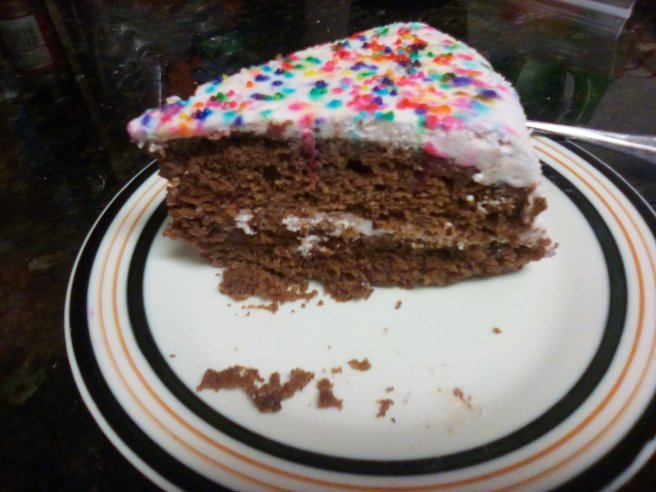 Unfortunately, my bottom layer had issues (remember when I said the grease and coat with cocoa powder is not a perfect method? Um, yeah) and I clearly could have used more whipped cream on the filling. But not bad for the last slice four days later!

For more recipes or to read about my adventures in ratio baking, head over to the Kitchen.