Wow, this one was from about 2 years ago, when my mom and I used to take my baby and toddler to the local farmer’s market and buy up some French-style yogurt. Now I’m too paranoid to go to farmer’s markets, but am really suddenly missing this yogurt, and the too good berry tarts I used to make with them.

In all honesty, during that time I was so tired and not weathering pregnancy very well that we hardly ever stopped to browse. Besides, my son had more fun running over those non-slip strips with their little yellow bumps that always had him giggling. He referred to our weekly visits as “going to ding ding, bump bump” with the ding ding being the elevator and the bump bump the strips.

But as I came to the end of my pregnancy, my mom was staying with us and, just to get out, we went to the farmer’s market one day. We browsed the stalls, smelled some bread, bought some berries, and discovered delicious French style yogurt from Bonjour, a local yogurt company that can only be found at local farmer’s markets in Southern California. It was rich and creamy, thick and delicious. The flavors were spot on and it’s naturally sweetened (and lactose free).

About a year passed before we returned. Not because it wasn’t delicious, but because I was busy caring for a baby and a toddler. It took me a while to figure out how to get out the door with two kids and how to keep them with me until we returned home. But my mom and I were delighted to see Bonjour was still in business.

It was the height of strawberry season. Not only did I buy some amazing yogurt, but I also got a small mountain of strawberries and blackberries. I had wanted raspberries, too, but no one had any so I settled for raspberry yogurt from Bonjour.

I remembered an episode of The Pioneer Woman where she made a berry yogurt parfait. I had yogurt. I had berries. I was inspired! And my berry yogurt tarts were born, though I’m very sad that strawberry season is now over.

Yogurt and I have a love-hate relationship. It’s always delicious, but, sometimes, I just can’t stand the sight and smell of yogurt. But I always return to it. See? Love-hate. Being pregnant and extremely picky last year, I passed on trying the yogurt, but, for some reason, I was craving it this past Spring. Being unsure of how I would like it, I decided to pair the yogurt and berries together and, since I had some plain Graham crackers no one was touching, I thought it would be nice to make a nice crust with it.

I’m not sure who had more fun crushing the crackers: me or my toddler. But they got crushed and I added some sugar and melted butter to make the crust. My son has tried to help me distribute it across the ramekins and has tried to help me press the crust in, but my daughter always wants up, so it’s easier to let him pour while I do it myself. Sorry, kid. 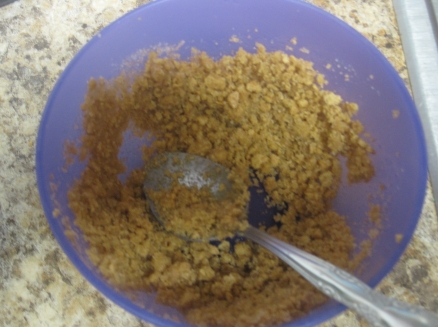 Inspired by the Pioneer Woman’s recipe, I mixed the berries with some sugar and vanilla extract and let it sit for a few minutes. Though it wasn’t always easy since it turns out my daughter is a strawberry fiend (still is). Since it was strawberry season, I, of course, used strawberries as well as blackberries, and added raspberries another time. You can also use blueberries and any mixture of berries you enjoy. I just happen to think blueberries are disgusting. Shh! Don’t tell my kids! Actually, they don’t like them, either. I tried.

While the berries marinated, I pressed the crust into the ramekins and spread the remainder out between about a half dozen baby food jars (I can’t seem to bring myself to throw any of them out).

Next came the yogurt. After fighting the lid, and winning, I let my son try to take a spoonful out. But that stuff is thick! He quickly gave up and let mommy spread it out over the crust. This required a spoon and butter knife.

Let’s pause a moment to talk about yogurt. The Pioneer Woman used Greek yogurt and mixed in some honey and vanilla. I, however, think Greek yogurt is stinky, so will not go anywhere near it. Bonjour’s French style yogurt was perfect as it is also thick, but not at all stinky. I have a particular fondness for their raspberry yogurt. Yoplait recently came out with a French style yogurt called Oui, which would probably work great as it is also thick, but I happen to already love Bonjour, so will stick with them. If you’re ever in SoCal, check out the farmer’s markets and give them a try!

Finally, it was time for the berries, including whatever strawberries were leftover after I was forced to feed some to my daughter to keep her from trying to throw herself out of my arms (even though she wouldn’t let me put her down). Yes, she can be a little drama queen (still is, just 3 now instead of 1). I scattered the berries across the yogurt, trying hard to use as little of the syrup as possible. Between the syrupy berries, sweet yogurt, and sugared crust, I did not need more sugar!

Delicious! Even though my daughter ate all of my strawberries. The first time I made it, I pressed the crust a little too well and was stuck slamming my spoon into it in attempts to break it up. So, if you make this, a light pat on the crust will ensure it breaks up easily and you don’t have something like a brick to cut into.