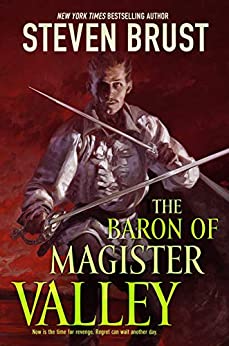 Title: The Baron of Magister Valley

Summary: (I don’t do this often as I prefer to write my own summaries, but I happen to absolutely adore this one, which is taken from Amazon)

Reader, you will undoubtedly have had the misfortune of consuming the rotten fruit of fallacies that we—Paarfi of Roundwood (esteemed historian of House of Hawk and exquisite artisan of truths)—“borrow” our factual recount of Dragaeran history from some obscure fellow who goes by the name Al Dumas or some silly nomenclature of that nature.

The salacious claims that The Baron of Magister Valley bears any resemblance to a certain nearly fictional narrative about an infamous count are unfounded (we do not dabble in tall tales. The occasional moderately stretched? Yes. But never tall).

Our tale is that of a nobleman who is betrayed by those he trusted, and subsequently imprisoned. After centuries of confinement, he contrives to escape and prepares to avenge himself against his betrayers.

A mirror image of The Count of Monte Cristo, vitrolic naysayers still grouse? Well, that is nearly and utterly false.

The Baron of Magister Valley is not a retelling of The Count of Monte Cristo. It says so in the description. Psst! It totally is! And, yet, isn’t. But that’s the point. It very closely mirrors the classic while also putting on a new, fantastical, updated spin. As a fan of The Count of Monte Cristo (true story, I spent years hunting down an unabridged copy after being completely confused by an abridged edition), I couldn’t not request this from Netgalley, and was incredibly delighted to be approved for this title. I don’t think it’s for everyone, but, for anyone who has loved The Count of Monte Cristo, I highly recommend this not-retelling. Which also happens to be number 6 in a series of standalone novels (I have a bad habit of picking up books in the middle of a series, so I’m glad this is also considered a standalone!).

The Writing: Quite Proper

The writing is not something I normal write about in my reviews, but I think it’s something I should start with here. The writing is stilted. It’s very polite and proper and very reminiscent of novels like The Count of Monte Cristo. Brust captured both the speech and way of writing, which makes it very different from the standard fantasy, and general fiction, of today. It’s not for everyone, but it absolutely does wonders for the atmosphere in the novel. The dialogue is full of tell versus show, but it’s also easy to follow, makes perfect sense, and moved the story along without any ambiguity. I wasn’t expecting it to be written the way it was, and can see how it might not be for everyone, but I find I was delighted by it and even found myself easily slipping back into the novel whenever I picked it back up.

The Characters: Familiar, But Unique

The characters are like those in The Count of Monte Cristo, but not. They’re given a fresh, new spin in The Baron of Magister Valley, and not just with some magical skill, especially the two main females. I liked that they were similar to the characters I love, but were also uniquely their own in ways that made sense for both the story and the setting.

Eremit is Edmond. He had the same innocence, the same looking forward to a future of pastoral and marital happiness. He was dutiful and honorable, and wrongly imprisoned. I loved that he had the same drive to learn what he could from a fellow prisoner and to take his revenge as fully and completely as possible. He had the same air about him, but somehow felt uniquely Eremit.

My favorite was probably Livosha, who corresponds to Mercedes in that she is Eremit’s betrothed, but the similarities end there. While Mercedes has been depicted as fragile and feminine, Livosha is anything but. The woman can fight, negotiate, do hard labor, and take revenge with the best of them. She’s strong, smart, and relentless. Instead of resigning herself to a life without her betrothed, she literally spends centuries (people age very differently in this world) looking for him. I adored her; she’s definitely the modern heroine this story needs while still remaining true to the spirit of Mercedes’ character.

I did find it hard to see the villains in this story as truly villainous, but I also got that feeling in The Count of Monte Cristo so it didn’t bother me too much. I loved that there was a group who set out to obtain one thing and another group set out to get their revenge on them for stealing what was theirs. They all had their roles and I thought they were fulfilled flawlessly, but some of it did feel like it was a little lacking in life.

The one character I found really interesting, though, was the historian telling this tale. The Baron of Magister Valley revolves around an historian recording the story of Eremit and Livosha, but he lives long after the couple lived. It was fascinating to learn about him during the frequent asides in which he discussed the history of the world, how things changed, some philosophical thoughts, and why he chose to record the story the way he did.

The Setting: Full of a Rich History

Since this is the sixth book set in this world, it felt very established with history and cultures. But, since each book is considered a standalone, I don’t feel like I missed out on any world building; instead, the world was right there before my eyes. It felt like it had existed for a long time, felt like it had been carefully crafted, and this was the result.

It’s a far flung kind of world. There are so many places, and so many different kinds of places, from a secluded jail to bustling cities that have edged over into unnavigable. I felt like the world was brought to life in my head while I was reading. I didn’t get a crystal clear view of what everything looked like, but the world still felt alive, like it was breathing and the time in that world was continuing to march on.

One thing I do wonder if I missed out on was the different Houses. I’m not too clear on them, but it seemed like everyone was born to a specific line in which they were meant to be sailors, aristocrats, servants, etc. I think I picked up on enough to figure it out, but the details and specifics of them eluded me. Still, I found it fascinating, and even more fascinating to see it lent itself to a caste system that most people actually found to be suitable. I suppose it was nice to see that everyone knew their place and where they belonged.

The Plot: A Fantastical Story of Revenge

The Baron of Magister Valley borrows heavily from The Count of Monte Cristo. It is a retelling of the story in terms of the revenge and how elaborate it was. In the latter novel, the hero is wrongly accused and imprisoned. There, he meets a fellow prisoner who teaches him, tells him of an island with untold treasure, and helps him escape. Newly minted Count of Monte Cristo, the hero returns to exact his revenge on the men who crafted his downfall. The Baron of Magister Valley closely follows this course, but differs in particulars. For one, there’s some magic going on, and it felt much more linear and less elaborate than the giant tome it is based on.

I did love this book. Once I acclimated to the stilted, formal writing, it was fun to get to know the characters and see their behaviors and motivations driving the story. It’s quite a bit faster than the book it’s retelling, but it still provided a complicated enough web of lies, deception, and power hungriness.

I loved the familiarity of the story, which really let me enjoy how Brust chose to retell it. It felt like an updated version that’s been transplanted into a fantasy world. There was an interesting duality in that it felt old-fashioned with the class system and the idea of servants being way down on the bottom rung and everyone being so polite and formal, but modern with how strong and capable the women tended to be.

Overall: A Fun Spin on a Classic

The Baron of Magister Valley was a fun read. I loved the retelling and the unique spin Brust put on it. It does make me curious about the previous five standalones and I’d love to get to know this world better. There’s a rich history to this world. I liked that the characters were familiar, but different and that the story was similarly comfortingly familiar, but with it’s own unique flavor. The only part I felt ambiguous about was the end. I loved the way The Count of Monte Cristo ended, and I loved the way this novel ended. It was interesting that they’re so similar, yet so different and they lent themselves to similar, but very different endings that were still satisfactory. Overall, a very satisfying novel for anyone who loves The Count of Monte Cristo.

Thank you to Netgalley and Tor Books for a free e-copy. All opinions expressed are my own.

6 thoughts on “Book Review: The Baron of Magister Valley by Steven Brust”