The Lily Cafe is thrilled to welcome mystery author Bluette Matthey! She is the author of Two Murders Too Many, as well as the Hardy Durkin Travel Mystery series.

Title: Two Murders Too Many

Meet Charlie Simmons, Shannon’s newly-badged police chief, loved by kids and dogs everywhere. He’s in way over his head on this one in Two Murders Too Many, but Charlie has never been known to back down from a challenge: in this case, two grisly murders and a string of blackmail victims showcasing the Who’s Who of Shannon, a small, midwestern town in an earlier time. Two Murders Too Many, Bluette Matthey’s latest mystery, is an adaptation of true and terrible events from her father’s childhood, which captures life’s most innocent and darkly evil, no matter where you live. Welcome to Shannon, where whimsical meets wicked, but murder never goes out of style.

On Two Murders Too Many

I come from a heritage of story tellers. Author Gene Stratton Porter is part of my family tree, but more closely and importantly, my father was an amazing raconteur who enthralled his family and friends with tales of his youth in the small Ohio town where he was born and raised.

Our town was a patchwork of immigrant settlements (Swiss, German, English) which tended to keep to themselves, socially. Cousins often married cousins, and this inbreeding resulted in offspring that could either be extraordinarily gifted and talented or mentally deficient. The latter, if not too handicapped, became a colorful part of the community at large known as ‘town characters’ with names like Luke McGluke, Foxy Worthington, Dirty Doc, and the Weldy Boys.

This was a gentler time in our nation’s history when, at least in the smaller towns, there was a sense of collective responsibility for these more vulnerable citizens, and their shenanigans on the public stage became, affectionately, the stuff of humorous local legend. My dad had a knack for capturing the personalities of these various characters, and he gave lively renditions of their vaunted escapades to spellbound listeners who never tired of hearing them.

As a young boy growing up in a small, close-knit community, my dad was a Mark Twain sort of boy, always in-the-know and missing nothing that happened in his surroundings. His lifetime experiences spanned over ninety years, resulting in a perspective unique to a person with his intellect and portfolio of memories.

My latest book, Two Murders Too Many, wraps itself around many of my father’s tales and is an adaptation of an actual murder in this small town’s history. Even small towns have an underbelly of secrets and human darkness where potential monsters dwell.

In Two Murders Too Many, the small Midwest town of Shannon has such a monster in its midst, unknown to the rank and file citizens whose lives ebb and flow in an orderly fashion, innocent and generous in spirit. A second, lesser Beast and his crimes are uncovered, shining a spotlight on other shadowy currents underlying the town’s tranquility. In the end, we uncover a cauldron of subtle and not-so-subtle ingredients that stirs a stew of the human condition.

“Len fumbled with his belt buckle, finally managing to get it loose. Marilyn writhed in the straw beneath him, incensing him even more. She reached over her head in a state of ecstasy, like she’d seen in the movies, and felt a hand.

She looked at Len; both his hands were working to undo his jeans. She groped further, feeling the cold, stiff fingers.

Marilyn bolted into a sitting position, a look of terror on her face.

He grinned sheepishly. “It’s hard, alright, Baby, but it sure ain’t cold. I’m on fire!”

Marilyn rolled away from where she had been laying, pulling on her clothes, fumbling to fasten them. She was almost hysterical.

“There’s a body in the straw, Len,” she croaked. She was visibly shivering. “A dead body.”

“There’s no doubt about what killed him,” Doc Steiner, Shannon’s medical examiner and sole doctor, said after a quick look at the lifeless body of Otto Hilty where he lay, partially covered by straw bedding in the livery barn. He shone his flashlight on the dead man’s face.

Involuntarily, Charlie recoiled in horror at the rusty bail hook that had been imbedded in Otto’s right eye, killing him with the brain trauma it inflicted. A cascading wash of drying blood under his destroyed eye colored an otherwise pallid visage. 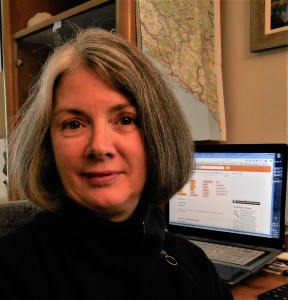 Bluette Matthey grew up in a small Midwestern town, reading mysteries and being frightened to death as a child watching Alfred Hitchcock on Friday nights. The result: Two Murders Too Many, Bluette’s latest mystery.

Bluette Matthey loves to travel as well as she likes a good mystery. She combines her two passions in her Hardy Durkin Travel Mystery Series, with her protagonist, trekker Hardy Durkin, taking readers to Corsica, Dalmatia, Abruzzo, Italy, The Black Forest, Germany, and the Swiss Engadine Valley. As always, Hardy is never far from a murder or two invariably finds the key to solving the crimes.

Matthey has a boots-on-the-ground approach to her writing and insists on visiting (and often hiking) each locale featured in her books, focusing on the region’s history, culture, and food as backdrop for her mysteries. Her treks mimic less strenuous versions than those of her protagonist, Hardy.

Two Murders Too Many is a break from her travel mystery series, zeroing in on characters in the small town of Shannon, Ohio, with shadowy facets of their lives hidden in the miasmic underbelly of where they live. These dark secrets are gradually uncovered by Charlie Simmons, acting Police Chief of Shannon. Matthey’s story teases the reader through scenes of normal, everyday life and disasters that stun the citizens of this traditional community.

Bluette lives in Béziers in the South of France with her husband and two demanding cats. Béziers is France’s second oldest city, with history dating back to 500 BC, and the setting of Bluette’s next Hardy Durkin mystery, Homicide Hérault.

Thank you so much, Bluette!

The author, Bluette Matthey, retains all rights to the guest post and excerpt published above, which may not be copied, reproduced, modified, sold, or distributed without the author’s express permission. To contact Bluette Matthey to request permission to utilize the above guest post and/or excerpt, please send your inquiry to Kat via the Contact page.

Check out more guest posts by dropping by the Writer’s Lounge.