Fantasy is by far my favorite genre. I also like to think I love science fiction, but it often goes a little too far over my head. Still, I guess I enjoy torturing myself because, when it’s presented to me, I have a really hard time saying no.

So it should come as no surprise that I’ve reviewed over 40 fantasy and science fiction novels this past year. That means roughly half of my reviews are for this broad genre. Like I said, my favorite. And I still think I need more fantasy in my life. Or maybe I’m just so completely freaked out by the pandemic and so exhausted from distance learning with a 6 year old that I need to deep dive into fantasy.

It hasn’t been easy to come up with the single best SFF read I’ve had the honor of reviewing this year, so I decided to talk about all of my favorites before narrowing it down to one.

Of all the SFF books I’ve enjoyed this past year, only 12 really stand out. There were some that, unfortunately, were forgettable to me. There were also some that turned out to be in the middle of a series (I hadn’t read the first book(s) first), so I don’t think it fair to put them up against other books I’ve enjoyed. Then there were plenty of others that I enjoyed, but didn’t fall in love with in the same way I did the 12 I want to highlight.

I think it’s safe to say I adored the world building in all of them. I don’t think there’s a single one that doesn’t come with an amazing world that felt like it just wrapped around me and pulled me in. So, I suppose, I’m just a fan of excellent world building. Other than that, they all seem so different that I’ll just have to do this one in list form. 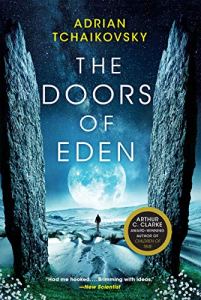 I want to talk about The Doors of Eden by Adrian Tchaikovsky first. Mostly because my husband has been keeping me up late at night to talk about parallel worlds and the possibility of a multiverse. This book instantly comes to mind. But it is fascinating with quite an intense world and story. It presents the possibility of parallel worlds where each one branched off from one that now seems to be dying and it’s up to a very motley group of creatures to figure out how to fix it. I was a little apprehensive at first because the first chapter scared the living daylights out of me, but I scare easily, so… 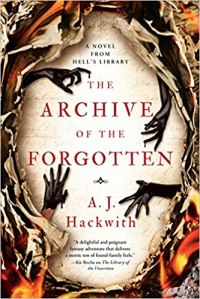 Next up has to be The Archive of the Forgotten by A.J. Hackwith. Instead of parallel worlds, it’s the second in the Hell’s Library series and explores the death realms. The first novel, The Library of the Unwritten, was a dizzying tour of death realm after death realm with a good bit of time on Earth thrown in. The second installment felt calm in comparison, but it was nice to explore other parts of Hell’s Library. I also loved getting to know the characters better. Seeing their relationships change and bloom was beautiful in so many ways and I adored all of them so much. 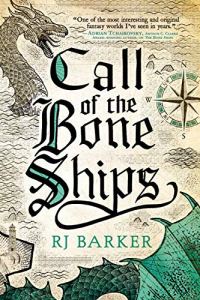 And talking about death leads me to Call of the Bone Ships by RJ Barker. Also the second in the series, it raises the stakes for the crew of a dead ship called Tide Child. It’s entire crew has been condemned to death and sails on a black ship. Shipwife Meas, daughter of the ruler of the Hundred Isles, has made it Fleet, but unrest brews both in the Hundred Isles, between Meas and her mother, and on Tide Child himself. What I really love about this book and the series is that it completely draws me into the world. I get sea sick really easily, so real sea adventures are out for me. Reading this satisfies my thirst for sea adventure and I feel completely immersed in the world. Also, it has one of my favorite creature companions, Guillame, an avian creature with power over the winds that has become friends with the main character Joron Twiner. 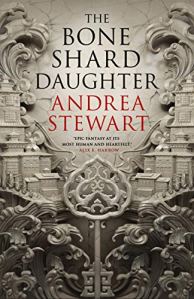 Speaking of creature companions, The Bone Shard Daughter by Andrea Stewart has my favorite. In a world without a pandemic, this one would probably be my favorite read, but something about it weighed a little too heavily on my heart. It follows a handful of characters who live and survive on one of the many islands comprising the empire. The emperor uses bone shard magic to control his people and supposedly keep them safe from an ancient enemy, though he holds his own secrets. As for the creature companion, I adored Mephi so much! I’m sure anyone who’s read this book knows what I’m talking about. He’s the cutest, most adorable creature ever and I want him to be mine.

Another favorite creature companion is in Leads & Lynxes by Rebecca Chastain. Quinn the the loyal, yet young gargoyle companion to junior journalist Kylie Grayson. In this first book of the series, Kylie and Quinn find themselves in an off-limits placed called Lunacy Labyrinth. What follows is a crazy, scary, breathtaking journey for Kylie, Quinn, and a few members of a law enforcement squad led by an entirely too handsome captain as they chase a murderer and hunt for a special rock for a super scary harpy. The relationship between Kylie and Quinn is so sweet and I love just how much they care about each other and want to protect each other. 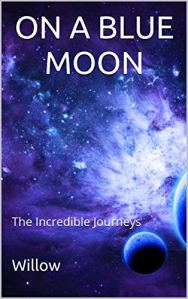 Speaking of crazy settings, On a Blue Moon by Willow isn’t exactly crazy, but it’s definitely incredible and different. Sam is a man from Earth who has been extracted and moved to an unknown moon populated by people transplanted to the moon over an unknown period of time, it explores how people develop societies and how they manage and live on an alien world. I loved how the world felt both barren and teeming with life, how the characters made full use of it, and how the book told an amazing story of an odd assortment of individuals creating a family, a society. 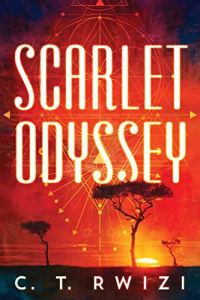 Scarlet Odyssey by C. T. Rwizi also had an incredible world. Admittedly, everything took a backseat to the world building in this one, but that’s what I loved about this African-inspired fantasy. It was lush and real and so incredibly detailed. It begged me to immerse myself in it. The characters were gender role defying, but the world stole the show. The world building was so amazing that I was almost halfway through before I realized the story hadn’t actually moved much. But the next book comes out next year, so I can’t wait to see what happens next and to get back into this incredible world that just feels so real. 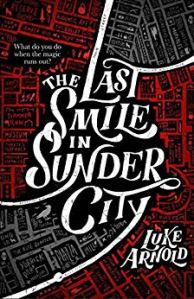 Another world that came to life for me was in The Last Smile in Sunder City by Luke Arnold. The first in the series, it comes off as a noir fantasy mystery. It follows a human walking a world where there is no more magic. The magical creatures are suffering, and so is Sunder City, so Fetch Phillips does his best to help the magical creatures as a Man for Hire. Set in a city that depended on magic, it feels both alive and desolate. There’s something bleak about it, but I loved that Fetch was always still trying. 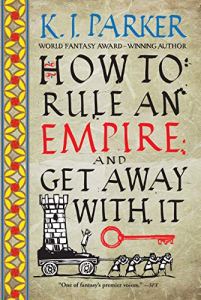 But to lighten things up, there’s How to Rule and Empire and Get Away With It by K.J. Parker. Going in, I didn’t realize it’s a sequel, which wasn’t strictly necessary since it takes place years before the events in this book. This novel follows an actor who ends up forced into masquerading as a man who was accidentally killed by the military might laying siege to the city in order to keep the city running. He ends up in charge, but in quite humorous ways. This one was so much fun to read and definitely had me giggling now and then. A delightful read in so many ways because the characters were that much fun and the story offered more than enough ways to make light of everything.

Switching gears, I’m veering into the realm of mythology and folk lore with The Mermaids Melt at Dawn by Grendolyn Peach Soleil. Told in a series of 10 yarns, it still manages to spin a darkly magical web. Drawing on mythology and folk lore, it creates its own and is centered around mermaids who live in a secluded lagoon and who grant wishes, if the wisher is worthy. This is a gorgeous read that made me believe the mythology and lore it spun could be real. 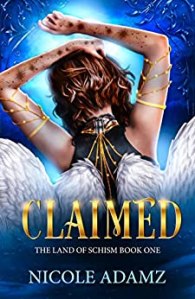 Finally, before I get to my favorite read of the year, there’s Claimed by Nicole Adamz. This one is incredible in so many different ways, from the characters to the setting to the societal intrigue to religious clashes. This book just has it all. It follows two very different women who turn from friends to enemies in a world where people have wings, but not all of them are blessed in the same way. The world building is incredible without being overwhelming and the characters are so intriguing. The first in the series, I’m really looking forward to reading on.

But my absolute favorite SFF read of 2020?

The Bright and Breaking Sea by Chloe Neill!

Honestly, I expected something along the lines of The Bone Ships and that’s why I requested it. But it turned out to be a fascinating blend of the sea adventures found in that trilogy and Jane Austen’s novels. Set during the Napoleonic years during which Napoleon was about to escape Elba, The Bright and Breaking Sea takes a fantasy approach to history and focuses on Captain Kit Brightling, a young woman who is attuned to water and serves the Crown in many ways, and Colonel Rian Grant who doesn’t want anything to do with war, but is indebted to the man he and Kit are sent to rescue. Their adventures at sea were fun and full of action, but I also loved their adventures and espionage on land. They made the perfect pair and I adored how well they worked together. This is lighter fantasy that blends fantasy, history, and Regency-style novels into a fun start to the series. It’s exactly the kind of light, fun read I needed this year, and it doesn’t hurt that Jane Austen is one of my favorite authors. Jane Austen plus espionage and sea adventures? Yes, please!

So, there you go, some SFF I’ve read this past year. Do you have a favorite SFF novel from this year?