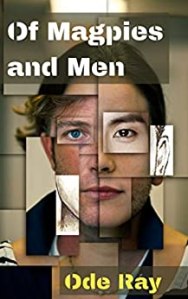 To be honest, when Ode Ray requested the review, I got stuck on Italy and was completely sold. So, going into the book, I had zero idea what genre it was in, as well as what, exactly it was about. Going back to the book description, I became curious about how two people living in different countries with very different lives could somehow have a connection, especially a connection to a completely different, third country. Reading it, I felt it was two-thirds literary/family fiction and one-third mystery, but it all worked out quite well in the end (well, not for all the characters, but I loved how the story really did come together to piece it all into a whole).

When Family Secrets Lead to a Mystery

In Italy, the bodies of two men wash up on shore. Detective Giandomenico Paoli is in charge, but little does he know it’ll take him decades into the past and to a different country.

Benedict’s mother has a secret, but passes away before she can tell him. Instead, he’s left with a confession in a note, kicking off both a crazy search for a single person who might lead to more people and what could be the love of a lifetime, if only he could get over his own expectations for his life and live the way he’s meant to live.

Marie is a single mother and nurse living in her late partner’s gypsy camp with her young son Romain. Her father is in prison and her mother ends up living with her. She’s led a hard life, but still manages to hold onto her dreams and find the good in life.

Unexpectedly, the lives of these three people are about to collide, revealing long held secrets and family turmoil years in the making.

Of Magpies and Men was a very surprising read. I expected something more along the lines of a mystery or thriller. Instead, most of the story read like literary or family fiction. There’s a huge focus on piecing a broken family back together, of a family that didn’t know it existed forming something of a cohesive whole. It also deals with sexuality and stigma, stereotypes and interracial relationships. It’s handled beautifully, notably through the huge heart of Marie, whose story absolutely, completely broke my heart.

But there is a mystery and thriller component to this book. There are two dead bodies the reader is introduced to right away. It’s told in bite-size pieces throughout the story, but doesn’t become the full-blown focus until the end. It just gives enough bites to remind the reader there’s this whole other story going on in parallel. I do wish they had been intermingled better so it felt more like half and half, but it really does come nicely together at the end. While reading, I wanted it to be one thing or the other, but then the end would not have been what it was.

Of Magpies and Men explores the nature of humans, of how we think and function and live. It’s told beautifully through the lens of a family that experiences it all, that deals with it all, that still manages to hold amazing hearts. It offers two sides of the story while also embracing the need people have to both pull and push away. The end is heartbreaking, but only magnifies the beauty of this story.

Two Unlikely People With More in Common Than They Thought

Of Magpies and Men is centered mostly around Benedict and Marie. There are a number of other characters, like Marie’s parents and her son, the Italian detective, and Benedict’s close friend Yukinobu. They’re each unique and represent something of human nature, from childish curiosity to the justifications of an abuser to the faithful pursuer of truth and justice.

For much of the novel, Benedict felt a bit like a loose cannon. He sometimes felt a little unhinged and more than a little self-centered. He wasn’t exactly likable, even when his mother died. He’s given so many opportunities to become better, but it takes him what feels like forever to figure it out. He does have his moment where he discovers he’s fully grounded and surrounded by people who actually care about him, and finally becomes the sort of character I can enjoy and smile at.

Marie is just amazing. Throughout the entire novel her love and brightness reaches the far corners. There’s something so internally beautiful about her even though she had a tough childhood and now has a young son dependent on only her. She’s the kind of mother in a novel who really is a mother, who really looks out for her child, who really does everything for her child. She very often felt like goodness and righteousness personified while also feeling wholly human.

Most of Of Magpies and Men is set in London and France. There isn’t as much Italy as I would have liked, but I enjoyed traveling around with Benedict and Marie. Overall, though, I didn’t get a deep sense of place, more of a feeling of the various settings. I did like how France came to life through food, though.

Describing the setting feels like an ephemeral thing. On the one hand, I know it’s a concrete location. On the other, it feels like something more than that. It’s set in the hearts of the characters. The story is told from their perspectives, views, beliefs, and histories. It colors the entire story, even down to the setting. They could be anywhere in the world and still be them playing out the same story. Or maybe it was the overall literary feel to the writing. Even though some of the phrasing felt a little off, it still came across as akin to literary, making it feel down to Earth, earthy in a lovely brown kind of way with broad strokes of color and emotion splashed here and there.

Of Magpies and Men was quite a surprise to me. I expected one thing and got something else. I was a little worried about how it would all mix together, but, while I wish it had felt more even, it really did wrap up nicely. The end did feel a little at odds with the rest of the book as it’s faster paced and holds a ton of action and suspense, but one thing could not exist without the other and still turn out a lovely story. Marie and Benedict were fantastic and handled so many social issues with incredible grace and tact. Overall, quite a fascinating story with so many different aspects to it neatly wrapped with a bow.

Thank you to Ode Ray for a review copy. All opinions expressed are my own.

Ode Ray is a debut author. She was born just outside of Marseille, France. Since 2007, she has been based in leafy Oxfordshire, UK with her family. After spending most of her working life as a Marketer, educating consumers about the wonders of products such as whiteboards, she decided to put pen to paper to write “stories” of a different kind. Between school pick-ups and whilst also looking after her adorable toddler (who has yet to find a bookshelf he wouldn’t climb), she eventually finished her first novel, Of Magpies and Men.

Head over to the Bookshelf to check out my reviews of books from the Big 5 and self-published, indie, and small press books.