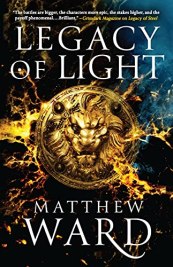 Title: Legacy of Light (Legacy Trilogy #3)
Author: Matthew Ward
Publisher: Orbit
Publication date: August 17, 2021
Genre: Fantasy
One Sentence Summary: Tressia and the Hadari Empire have settled into a tenuous peace, but the Empire is ill at ease and Tressia might just be ruled by the Dark.

Warning: Likely spoilers for Legacy of Ash and Legacy of Steel.

Legacy of Light is the final volume in the Legacy Trilogy. It neatly and beautifully wraps up all the character arcs, whether major or minor, and leaves a door open for more stories. It also wraps up the overarching story that I felt was a little buried under all the things happening through the entire second book, but it came back full force in this one. Overall, this was a very fitting end as it brought the story full circle like a hero’s journey. At times it felt a little like the story was drawn out or meandering and maybe a little plot heavy, but the ending helped make up for it in a way that made me cry.

It’s been five years since the events of Legacy of Steel and the Tressian Republic and Hadari Empire hold a tenuous peace, though the Eastshires are in dispute.

In the Tressian Republic, Viktor Akadra has become the Lord Protector and rules the city with his shadow at his beck and call. But those close to him, those he calls friends, see him changing, see his shadow taking over, and see the city suffering. Josiri, his closest friend, has become complacent, but it might not be at his own doing. Altiris, lieutenant of Josiri’s hearthguard has become close to Josiri, but, as a southwealder, will always feel different from the northwealders he now lives around and his youth makes him naive and trusting. With the Eastshires in jeopardy of being stolen by the Hadari, Viktor has no choice but to reclaim them, though he’ll do it on his own terms and in his own way no matter how his friends try to dissuade him, risking the Light and Tressia.

In the Hadari Empire, Melanna has settled in, though her rule does not go unchallenged. Now a mother, she works tirelessly to not only secure her rule, but her daughter’s. As challenge comes forth, Melanna must become warrior again with unlikely comrades by her side. But Melanna has always turned more to the gods than the Tressians ever have, and she’ll need them more than ever, at a cost.

And the Raven, well, he has something to say about the havoc Tressia decides to wreck on his realm.

The Legacy Trilogy is a bloody, brutal one full of sword fights and battle and war. Sometimes it felt like the pages were dripping with blood. Considering I dislike violence, I’ve spent the past couple of years questioning why I even wanted to start reading this series. It’s also incredibly long, with all being at or close to 800 pages. There must have been some reason for me to keep returning, and I think this final book proved to me exactly why.

After Legacy of Steel, I wasn’t quite sure what the third book could offer. After all, I couldn’t shake the feeling the second book had all the makings of a third book. I was afraid Legacy of Light would feel like an 800 page long epilogue. Well, at times it did. The first half was slow with no real major advancements, no big events. There was nothing that said “the story is starting now.” It felt more like a series of events leading up to something, but each event died off fairly quickly. It was like a string of events and the reader was swinging from one to the next. But I had a hard time seeing where it was all going.

And then the second half hit and suddenly I didn’t feel like I was reading an epilogue anymore. Legacy of Light finally became its own story. It finally closed out the major story arc that felt a little buried through the entire series. It became a true light versus dark story. It was also a fitting conclusion to all the characters. I really liked that it gave endings and beginnings to all of the major characters and even some of the more minor ones while also opening the possibility of more stories in this world.

In terms of world building, I don’t feel there was really anything left to explore. Actually, it felt more narrowed than the world explored in the second book. But it still managed to make me feel fully immersed and engaged with not just the landscape but also when it came to the divine. The gods weren’t quite as present, but they became more interesting and it was fascinating to get to explore the Otherworld. What I really love about this world is that it feels very familiar, but there’s a touch of the exotic, and I never feel I can pin down what the Hadari Empire has been inspired by. The world building has been so consistent from book to book and it’s easy to feel transported and to get lost.

What really shone in this book, though, were the characters. It felt more character-driven than the other two and I loved that it neatly closed out all of their arcs. After spending about 2370 pages with them, they felt so familiar and, as some of the arcs came to a close, I couldn’t help but cry a little. I guess that happens when you spend so many pages invested in them? There are so many characters, but I love how some of the minor ones really got under my skin and became almost like beloved friends. I loved how they were all so unique with so many different things motivating them. They were all amazing, and now I find it difficult to say good bye to them.

Legacy of Light is a fitting end to the trilogy. It neatly ties up the story while also leaving a door open. I loved that reading this felt like an immersive experience and that the world pulled me in. It was, of course, bloody and deadly. There’s no shortage of people dying and sacrificing themselves, but there are also quieter, beautiful moments and moments where characters are faced with the truth of themselves. In some ways it felt like an overly long epilogue, but, as long as I thought of it as a story about the characters, it felt less like one. Legacy of Light is focused on the characters and less so on the plot, creating an ending that has the potential to tug at heartstrings.

Great if you enjoy

Thank you to Angela Man at Orbit and NetGalley for a review copy. All opinions expressed are my own.

Head over to the Bookshelf to check out my reviews of books from the Big 5 and self-published, indie, and small press books.

6 thoughts on “Book Review: Legacy of Light by Matthew Ward”